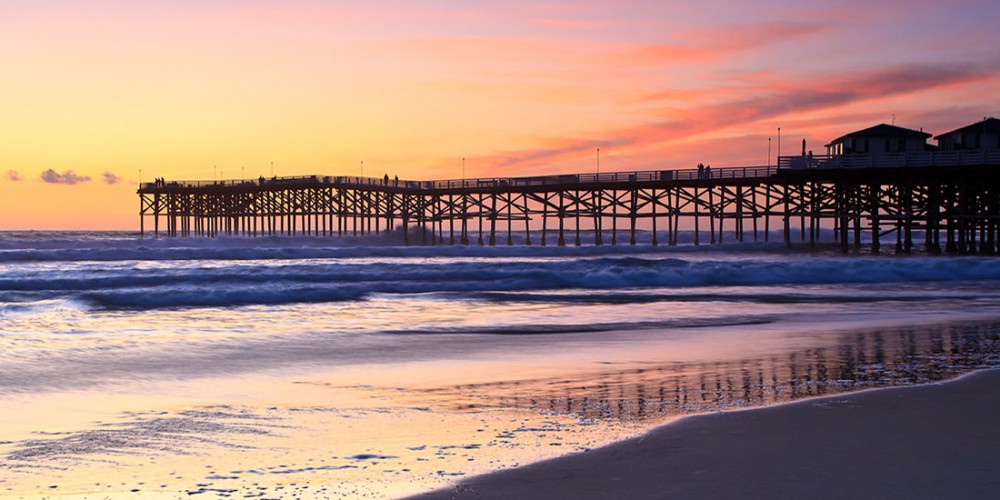 Pacific Beach is a neighborhood in San Diego, bounded by La Jolla to the north, Mission Beach and Mission Bay to the south, Interstate 5 to the east and the Pacific Ocean to the west. While formerly largely populated by young people, surfers, and college students, because of rising property and rental costs the population is gradually becoming older, more professional, and more affluent. “P.B.,” as it is known as by local residents, is home to one of San Diego’s more developed nightlife scenes, with a great variety of bars, eateries, and clothing stores.

Pacific Beach’s namesake stretches for miles from the Mission Bay jetty to the cliffs of La Jolla. The boardwalk, officially called Ocean Front Walk/Ocean Boulevard, is a pedestrian walkway that runs approximately 3.2 miles along the beach from the end of Law St. in the north down into Mission Beach, ending at the mouth of Mission Bay in the south. There are numerous local shops, bars, and restaurants along the boardwalk, and it is generally crowded with pedestrians, cyclists, rollerbladers, and shoppers. Also adjacent to the boardwalk is the Crystal Pier, a public pier and hotel at the west end of Garnet Avenue.

The streets in Pacific Beach were renamed several times before receiving their current designations in 1900. The primary north-south street running parallel to the beach is Mission Blvd., with the streets named after late 19th century federal officials, then incrementing in alphabetical order as they move further from the coast: Bayard, Cass, Dawes, Everts, Fanuel, Gresham, Haines, Ingraham, Jewell, Kendall, Lamont, Morrell, Noyes, Olney, and Pendleton. Mission Boulevard was formerly Allison Street, being the “A” street of the series.

Find Your Way Around Pacific Beach

National and County-wide news sources are slow and do not accurately represent what is happening in Pacific Beach area. Our Statistics are updated every few days to keep you up to date. Choose an area from the list below to see the latest information!